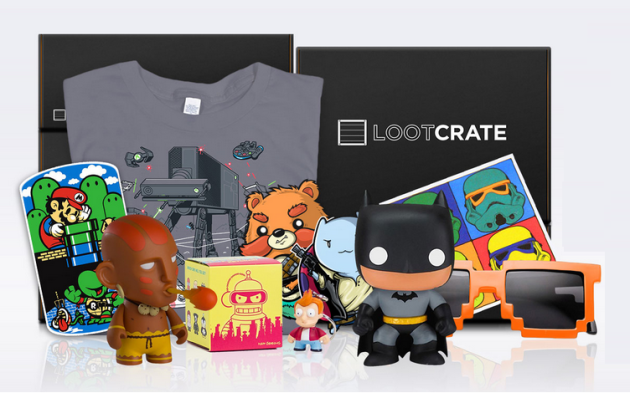 This week’s exclusive interview is with the lovely Marissa Zaenger! She will be talking on behalf of Loot Crate, our favorite geeky schwag company. Loot Crate is an awesome company that ships epic geek and gamer gear to subscribers on a monthly basis. Subscribers receive over $40 worth of retail in every crate and have a chance to win the impressive Mega Crate, which has over $750 in value. Previous crate items include an exclusive Titanfall T-Shirt, a Superman POP! Vinyl – Funko, a Batman Tyvek Mighty Wallet and The Zombie Survival Guide by Max Brooks and Random House, to name a few.

Thank you for your time, Marissa.

What was the inspiration behind starting Loot Crate?

Loot Crate’s co-founders met at a startup hackathon event in Los Angeles, but both come from a geeky background. Chris Davis owned a business called Gamer Food, which sold all kinds of caffeinated snacks for gamers, and Matthew Arevalo had done consulting for EA while being a huge geek and gamer himself. After seeing the types of things that people wait in long lines at conventions for, and watching Birchbox and the subscription business become relevant, they put the two together. By the end of that event in July 2012, Loot Crate was born and already had its first subscribers!

What was a monumental turning point for Loot Crate?

We’ve hit several astounding milestones in terms of subscribers and revenue, but a turning point that we often like to remember came in March 2013 with our COSMOS crate. That was the first crate where we started using our famous black and orange boxes (and it was also one of our most well-received crates). Before that, our boxes were white, and we hand-stamped each and every one of them! We knew that Loot Crate had become a real thing when we had to come up with a real crate design.

What have been some of your favorite moments while working at Loot Crate?

Me? Oh, goodness. I started at Loot Crate in December, right before the holidays and right as Looters were receiving their December crates. We’re very active on social (as I’m sure you’ve noticed!), and the week that people are getting their crates is always a crazy time for social response and moderation. I’ll never forget the first time I saw all the questions, comments, cheers, exclamations, and photos streaming in that week. The response was, to me, almost overwhelming, and it’s only getting bigger! My first week gave me a real sense of how awesome our Looter community is and how cool we are in how we engage with them. I always love when I get to high-five a Looter IRL.

I’d also have to include the fan letter we received from a 14-year-old kid telling us how much his little brother loves our crates, and how much they help cheer him up after he’s been bullied at school. That really resonated with me, and I wrote him back with a bit of personal advice and a tear in my eye.

Which is your most successful crate to date?

According to our Looter feedback data, our most successful crate was October’s SURVIVE crate, with September’s ANIMATE crate at a very close second. The Ewoking Dead shirt that came in October’s crate is one of our most popular items overall.

How do you decide on the following month’s theme?

We’ve gotten so large that we’ve had to start planning themes a few months in advance. Deciding the theme for every month basically boils down to three factors:

1) What new entertainment and video game releases are happening that month, and whether Looters would want exclusives around those things.

2) What artists, vendors, and partners we’d like to work with, and what gear we’re interested in from them.

3) What our Looters have been asking us for, and where we can fit those requests. (Yes, we read the comments!)

Loot Crate works with Capcom, Marvel, DC Collectibles, Star Wars and Nintendo to provide great geeky and gamer items for each crate. If Loot Crate could work with any company, who would it be and why?

DISNEY! They’ve got Star Wars, Marvel, ABC, timeless movies, really cool merchandise, and they might own the moon.

We’d also really love to work with Activision. They’re iconic, and our HQs are not that far from each other! Plus, I wouldn’t mind letting them know how much I love Spyro the Dragon.

How do you choose the Mega Crate winner? Do you use a crazy algorithm to randomly generate a winner?

I wish we had a huge supercomputer 100% dedicated to spitting out little pieces of paper with the Mega Crate winners’ names on them, but our methods are a bit more archaic. We basically have various Loot Crate team members choose random numbers within a range to determine the position of the lucky Looter within our database.

What are some of your favorite schwag items that you’ve given away?

We’ve also given away some seriously amazing things in our Mega Crates, like a Zelda Nintendo 3DS, an Attack on Titan Survey Corps backpack, and the hard-to-get LEGO Curiosity Rover. I actually got a bit jealous over those things!

What are some of the funniest unboxing videos and pictures sent by subscribers?

I remember a photo of a WWE wrestler opening his crate with an enormous sword. Ha! This past February was great because it included a bow tie, so we received TONS of adorable photos of pets in bow ties. There was even a snake in a bow tie! In April, we sent out Game of Thrones mystery figures, and many people that received Joffery took photos of the Nord figure killing him. One person colored Joffery’s face all purple with red coming out of his nose to imitate his poisoned death face. I laughed so hard at that one.

One of our favorite affiliates right now in terms of unboxing videos is Steve Zaragosa. His comedic style cracks us up every single month! Lisa Foiles and her cat Kevin are also great – the running joke is that Kevin knocks every item off the stool and attempts to fit himself in the crates. Kevin has a standing chance of actually winning the Internet.

Each month, your team creates fun videos related to each crate’s theme. How long does it normally take to film them and which theme was the most fun to work with?

We have a really talented team that we’ve worked with on several occasions to film our theme videos, and conception to completion takes about a week. Oftentimes less. We’ll film over a couple of days, and the rest is editing.

As I mentioned before, doing the January space launch was super fun for me. But I have to give major props to our team for the April “Westeros” video. It was an excellent mashup between Game of Thrones and Frozen, and it was picked up on major blogs like CNET, Huffington Post, and even PerezHilton.com! That video was also fun to create and tease up to its release.

Tell us something interesting about Loot Crate that isn’t well known.

Every day, someone tweets about us once per minute!

Keep an eye out for more videos on YouTube, more streaming on Twitch, and more exclusives in our crates. And a huge shout out to the Looters, of course. We know we give them shout outs on Twitter when we’re feeling a little emotional, but we wouldn’t be growing so quickly without their faith and feedback. Thank you for unboxing epic with us! :]

Thank you for your time, Marissa and thanks for checking out Gamer Compatible! If you want to know more about Loot Crate, you can follow them on Twitter: @lootcrate. May’s crate theme is “ADVENTURE” so check out their site!