Darkest Dungeon is a dark, gothic dungeon crawling game with turn based combat mechanics. In this role playing scenario, your four heroes team battle against enemies while testing their health, hunger, disease, stress and mental capacities. While the darkness slowly engulfs you, your ruffians’ psychological facilities are tested and are either plagued with afflictions or rewarded with heroic bonuses. Whether your Leper decides to become selfish and runs away from battles or whether your Hellion gets roused up and becomes the courageous one in the bunch is up to you. If you want to know our take on Darkest Dungeon, we have put together these reviews for you to read:

“I guess simply put, this game is HEAVY.  I don’t mean heavy that it feels slow and clunky, I mean it feels like everything you do has weight to it and impacts gameplay tremendously.  Every dodge and critical hit has rippling effects through the rest of that dungeon and your success or failure.  It’s a game that requires you to love your characters but also be okay with losing them when you screw up or the RNG gods are out to get you.

I do enjoy this game, though it hurts me so.  It has the roguelike elements I adore, with it’s own fresh set of mechanics.  The character, town and overall game progression feel quite ironed out despite it being in early access.  This is one of those few games that really stands out and has purpose doing exactly what it’s doing.  This game scratches an itch I didn’t know I had; if someone had asked me months ago if i wanted a turn-based roguelike dungeon crawler, I probably would have shrugged and walked away.  Luckily enough, this game was gifted to me. Not knowing much about what it had to offer, I was pleasantly surprised.

My only problems are issues that will certainly be solved as it leaves early access: a better introduction to the games mechanics, and explanation as to how many of the stats affect gameplay. Eventually achievements and more content should be added, etc.  But don’t get me wrong, this is a very complete feeling game and well worth investing early.

I don’t think I would change anything about this game, mostly because I’m still learning just how it works, and despite it being difficult and punishing, it does a great job of keeping me invested.  Last night, I was playing and streaming it, and what started off on a near perfect (lucky) dungeon run turned sour as I entered the last room.  2 Large skeletons and some ranged gunmen managed to successfully dodge most of my attacks while whittling down my health.  It was looking likely for me that I was going to lose 2 of my favorite characters.  As one of my party members was killed and hope was seemingly lost, I managed to crit twice in a row and bring the fight to a 3 vs 2.  A crit was landed against me. I lost another party member, which, mind you was a new member so I wasn’t terribly upset.  Round 4 started and I was barely able to pick off the last 2 enemies. With only a sliver of health remaining on my last 2 party members, I won the battle and my quest rewards rolled in.  I quit the game for the night, knowing very well I shouldn’t have survived.

Go play this game and see what I mean.”

“I’m a freelance writer and I also backed the Kickstarter campaign for Darkest Dungeon. One of the reasons I backed it was that it promised a Mac release. I’m usually playing on consoles, but it’s nice to have some games on my Macbook as well, and since Legend of Grimrock worked quite well on my Mac, I was looking forward to Darkest Dungeon to add to the genre.

I enjoy the game quite a lot. In the very early beginning – i.e. in the first days before release, between Jan 29th and Feb 3rd – I had some technical difficulties, but that was during a time when Mac wasn’t even officially released or supported yet, so I was just fine with even getting to play it. Since then, they patched the game many times and I find it runs reliably and rather smoothly. There are some minor bugs, as expected, but nothing game-breaking or anything I wouldn’t expect at this stage of development. Quite the contrary – I find that Darkest Dungeon is rather well-developed for an early access game.

As for the game itself, I was hoping for a darker atmosphere and new mechanics, and both hopes were fulfilled. The stress mechanic is interesting, challenging and occasionally funny in a very dark way. One thing I also like a lot is the variety of characters, and the fact that there are several female characters (and kick-ass ones, too); which is a nice touch for representation. Furthermore, I appreciate the fact that the characters won’t do any missions that are too far below their levels from a certain point on. It keeps the game challenging.

A memorable moment was the first time I encountered the Swine Prince: my party had full health, little to no stress, but was slaughtered within a few rounds. I lost two very good party members and I was sincerely sad about this. Just when I thought I had it all figured out, my party was nearly wiped and I had to withdraw. I loved it.

I would definitely recommend buying the game! On a scale of “nah” to “it’s worth trying” I’ll give it a “you’ll be sorry if you miss this one”.

“I first stumbled upon Darkest Dungeon at PAX East 2014 in the Indie Mega Booth. I was drawn in immediately by the art style: it was dark and gritty and had that graphic novel feel to it. After I gave the demo a try, I was instantly hooked and came back several times (spanning over Pax East and Prime) to play the demo over and over again! I literally couldn’t get enough.

So when the Week of Torment came out, I was thrilled. I was lucky enough to be a part of the Week of Torment and, honestly, haven’t stopped playing since. So to say I enjoyed the game is a bit of an understatement. When I’m not playing it, I’m watching streams of it. I haven’t been this obsessed with a game in a long while. It’s totally my GOTY 2015.

After I downloaded my copy for Week of Torment, I was experiencing game crashes and a few bugs. But I contacted the guys at Red Hook and within 48 hours, they had completely fixed all the issues I was having. They were releasing new builds every 24 hours, so they have been on top of it from the minute it was released. Everyone at Red Hook has been working hard to fix all the bugs and any issues that anyone is having.

Darkest Dungeon is a completely different game than anything I’ve ever played before. Typically it’s classified as a 2D rogue-like dungeon crawler, but it’s so much more than that. It’s like if Dark Souls and Thousand Arms pooped out a baby indie game and made Darkest Dungeon. The challenge in Darkest Dungeon pulls me in so hard that I feel like I have to win, no matter what. Normally games with a high difficulty don’t interest me at all, but something about this game just took ahold of me and won’t let go. It’s all I think about.

Whenever I play, there are always special moments. I enjoy naming my characters after my viewers, so that just makes for interesting stories and deaths. Having my viewers get involved with the fate of their characters makes it that much more special, and I’m ever grateful that Darkest Dungeon let’s me have that strong bond with the people that watch my stream.

I would recommend everyone to drop what they are doing right now and buy it! Trust me! It’s that good!

You can check out Aenne’s Oregon Trail music paired with her Darkest Dungeon video here.

“Darkest Dungeon is one of the best, most atmospheric games I’ve played in a long time. The writing is perfect and it’s one of the few Kickstarter games I’ve backed that has really fulfilled their promises.

Since the game is still in Early Access, I’ve definitely run into bugs and massive difficulty swings (though updates seem to adjust the difficulty). But that’s all to be expected this early in this game’s cycle.

Compared to other games in its genre, I like it more but that’s just because it’s more dramatic and story-based than many other rogue-like games. I feel like I’m exploring a world rather than a different version of a randomized dungeon.

If I could change anything, I might add a little more insight into the early game – what items do, what specific places do, how to upgrade equipment. Right now, things can be a little confusing as to what they do and what they cause as an effect. But that could be some of the fun in the design.

Every time I think I’ve figured Darkest Dungeon out, the game finds a way to take me down. I appreciate the occasional difficulty spikes as reminders of my characters’ mortality. Then again, I also hate them. So my feelings for the game depends on the situation.

I would definitely recommend purchasing Darkest Dungeon right now. For the price – even now – it’s a great game.

I’d hate to rate an Early Access game with a score. It’s unfair to count the bugs against the game. But all things considered, a solid 9. Once we get all the character classes, I’m sure it could go up.” 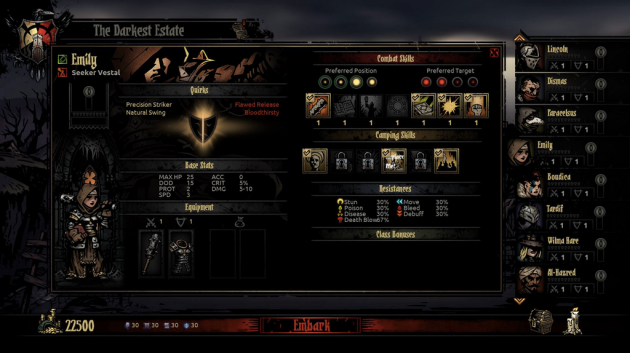 Thank you, everyone, for taking the time to review Darkest Dungeon. This game was developed by Red Hook Studios and was released for Steam on February 3, 2015. It’s confirmed platforms include PC, OSX, Linux, PS4 and PS Vita. If you want to stay updated on more Gamer Compatible reviews, you can follow us on Twitter: @gamercompatible or on Facebook: @gamercompatible.

All images were taken from Red Hook Studios.