On October 21, 2015, fans around the world celebrated Emmett “Doc” Brown’s much awaited time traveling date. This Friday, we are bringing to you “Back to the Future and Gamers,” where gamers discuss their feelings and opinions of this classic geeky movie. We are extremely excited to present our guests: Jimmy Wong aka @jfwong, Max Scoville aka @MaxScoville, Brad Overbey aka @Drift0r, Michele Morrow aka @michelemorrow, Kevin Wasielewski aka @ORIGINPCCEO, and Celeste Anderson aka @itsBiiTTERSWEET. My God! Do you know what this means? It’s time to go Back to the Future:

1. What was your initial reaction when you first watched “Back to the Future”?

Jimmy Wong: “I loved all three of the Back to the Future movies when I first saw them. I’m a big fan of any movie that can play with time travel and I think the initial movie did a great job making the concept digestible, dramatic, and easy to understand for audiences.”

Max Scoville: “Well, I loved it, obviously — I remember seeing all the movies sort of in a blur on TV and at friends’ houses, in pieces, and considering the second movie includes traveling back to the first movie, it was a little confusing.”

Brad Overbey: “I loved BTTF. I watched all three in one day! It was mind blowing.”

Kevin Wasielewski: “Well, that was a while ago so let me go back in time and see. 🙂  I loved it.  It’s one of those movies that is just intertwined into my childhood.  Marty and Doc are so loveable, Biff is such a jerk, and the DeLorean is the car everyone wanted.  I can watch it again and again.”

Celeste Anderson: “I thought it was incredible and extremely entertaining.  It was very creative for its time and became an instant classic for me. ”

2. What tech gadgets or video games did you own at the time?

Jimmy Wong: “Considering the first movie came out before I was born, the main tech in our house was an original Nintendo Entertainment System (NES) and the original Macintosh 128k.”

Max Scoville: “Not a lot. I think I probably had my first computer by then, a Macintosh Performa.”

Brad Overbey: “I owned almost no tech gadgets at the time. We were super poor and neither of my parents liked technology at all. They viewed it as bad for different reasons. I had a NES and a Quasar TV. That was it.”

Michele Morrow: “Some of my most prized possessions! A Walkman, a Commodore 64 loaded with games like Pacman, Jumpman, Impossible Mission, Moon Patrol, Buck Rodgers, and an NES with SMB1 and original Legend of Zelda.”

Kevin Wasielewski: “NES came out that same year so I was rocking an NES and my Atari 2600.  I was probably playing a lot of Pitfall.”

Celeste Anderson: “At the time? None! I wasn’t even born until 1989.  Even then, I imagine the first video game I ever owned didn’t come until 1998.  I didn’t own many tech gadgets growing up.”

3. How accurate was Back to the Future’s portrayal of current society?

Jimmy Wong: “A bit fanciful. Considering it’s a comedy a lot of their portrayal was more on the visual and campy side of things. The 3d-shark eating Michael J. Fox’s head is probably the most memorable to me. If you want a really scarily accurate prediction of modern society, you should check out Idiocracy.”

Max Scoville: “It’s a goofy and idealized version, but it got a surprising amount of stuff dead on. The Mets in the world series, commercialized nostalgia for the 1980s, video conference calling, excessive movie sequels. I think my favorite detail that everyone ignores is that everyone’s throwing away CDs. There are giant bales of physical media in the garbage when Marty gets out of the Delorean in 2015.”

Brad Overbey: “The accuracy is scary. It isn’t perfect by any means but it did predict several big trends: domination of Asian businesses (they had Japan instead of China), widescreen TV (but not HD), tons of movie sequels, 3D film, lots of small things. These things are just not as exaggerated as much as they are in the movie.”

Michele Morrow: “If you’re talking BTTF2, the 80’s nostalgia is real in 2015! I can’t believe it’s been 30 years since the original film. Watching now in 2015 gets me teary eyed… the world before social media and cell phones, and arcades at their height…. Crazy to think about. But I lived it! The movie certainly nailed the usage of biometrics, like fingerprints and scanning, as well as tech resembling VR but acting like Google Glass. The video game arcade scene with Elijah Wood is awesome, and implies gaming in 2015 would no longer need hands at all – which is something that exists today (even if it isn’t perfect technology, yet). They missed the Internet, but they definitely got the Skype-like video calls. Still holding out for flying cars and hoverboards! ”

Kevin Wasielewski: “Not very accurate at all as far as tech, lol.  We don’t have actual hoverboards in everyday use or flying cars.  We have smart phones that we use for playing games and social media.”

Celeste Anderson: “It was relatively accurate, such example would be holograms.  I haven’t necessarily seen a hologram in person myself but there have been full  performances that I have seen (Tupac, Hatsune Miku) on the internet.  We also do not have hoverboards, but we are generally close to it within the last couple years! The jacket he owned doesn’t exist but would be awesome to have! So there are things that were completely off, there are things where it seems we are on the right track to moving towards it and there are things that have happened!”

4. Which character do you relate to the most?

Jimmy Wong: “Can’t help but relate to Marty McFly the most. Being a musician myself it was great seeing him rip a sweet solo on the guitar.”

Max Scoville: “Anybody who doesn’t love Marty is probably some kind of sociopath. And Doc’s great, too.”

Brad Overbey: “I don’t strongly relate to any of them.”

Kevin Wasielewski: “Marty.  I think every kid wanted to be Marty.”

Celeste Anderson: “When I was younger, I would have probably related most to Marty’s Dad.  He was incredibly shy and didn’t want to socialize and talk with people.  If I had a crush on someone, I would have no courage to confront them.  Over time, he got more confident, just like I did. I ended up gaining confidence over time through video games and the community but I was very different 10 years ago.”

5. Which was your favorite “Back to the Future” movie and why?

Jimmy Wong: “The first one is the most classic to me. It’s got such a great premise and really gets you on the edge of your seat the whole time.”

Brad Overbey: “Part 2 was the best. It had the most time travel! Past, present, and future!”

Michele Morrow: “BTTF original, because as a 2nd grader, it was the first time that time travel felt like it was actually possible and not just science fiction. Maybe it was the actors, and maybe it was just because I was 8 years old with a highly active imagination. In that film, we travel back in time and saw the 50’s – a period my parents grew up in. I suppose it gave me an idea of what life was like outside of the moment I was in.”

Kevin Wasielewski: “Part 2 because I think that is where they went to the “Future” and saw all the cool stuff that we don’t have today.”

Celeste Anderson: “My favorite “Back to the Future” movie was the first one. It was a classic and it set the standards.  It was creative for its time and I think they did a fantastic job staying true to the 50s.  Overall, the movie was hilarious, emotional and so enjoyable.”

Jimmy Wong: “Stop. Feeding. Yourself. And. Your. Children. Processed. Foods.”

Max Scoville: “Learn to code. Do better in school. Warn myself about every awkward decision I made from middle school through present day.”

Brad Overbey: “I would be selfish and make crazy investments for myself. I would warn people about Global Warming, the spread of Radical Islam, the eventual fall of the Soviet Union, and then blow minds by talking about our Black President.”

Michele Morrow: “I would tell my parents to plan on buying lots of stock in Apple and Microsoft.”

Kevin Wasielewski: “That’s tough, I wouldn’t want to change the future.  Or maybe I would and I could invent Google, Facebook, and Smart Phones and take over the world…!  Nah.”

Celeste Anderson: “It is one of those things where I would love to interject and share the information out of pure excitement but I think I would opt out in giving any sort of advice.  You never know what you could change and if new information would affect in a positive or negative way (butterfly effect).  I am the type to be easily excited to share information that people may know, so who knows what advice I could give. If I could share a little, I would talk about the potential disasters to prepare, etc.” 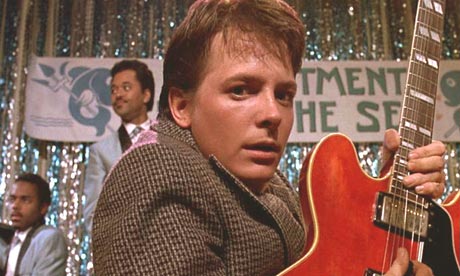 7. If they made a new “Back to the Future” movie, which time period would you like to see?

Max Scoville: “A time period in which they make new movies instead of ghoulishly milking every existing franchise dry to cash in on the general public’s nostalgia and aversion to unfamiliar things. I’m totally okay with there never being another Back to the Future.”

Brad Overbey: “I would love to see the mid to late 1960’s just before computers caught on and during the free love / drugs era. Great conflicts with McCarthyism and Vietnam that are still relevant today.”

Kevin Wasielewski: “I was thinking I really wished there was a “current” Back to the Future movie right now that showed 2045.”

Celeste Anderson: “I would probably choose to see 50 years after I die.  It seems that roughly every 50 years, drastic changes are settled and established.  I’d like to see what kind of revolutionary change would happen and to also see my children, etc. ”

8. If hoverboards were for sale, would you buy one?

Max Scoville: “I can’t even ride a normal skateboard, so I’d probably kill myself on a hoverboard.”

Brad Overbey: “I would buy a hoverboard in an instant!”

Michele Morrow: “Without a doubt.”

Kevin Wasielewski: “Probably not.  I don’t own a skateboard or Segway.  I would however attend the Hoverboard X Games!”

Celeste Anderson: “I don’t know who would say no to this, but absolutely. Hoverboards would not only be extremely fun, but very efficient for travel.  Minus the dangers that could come with it, haha.”

Thank you again for your time, everybody and thanks for stopping by! If you want to stay updated on more Gamer Compatible reviews, you can follow us on Twitter:@gamercompatible or on Facebook: @gamercompatible.